A Walk in Walt’s Disneyland Footsteps

During the D23 Expo, I made many new friends, and there was a lot of sharing of what we were doing around the parks before and after the Expo.     One thing that was mentioned more than once was the Walk in Walt’s Disneyland Footsteps guided tour at Disneyland.    A version of this tour has been offered for some time, but it has been recently upgraded and revamped, and everyone who had taken it spoke of it very highly.    Since I was going to be in town for a while after the Expo, I called the Disneyland Tour number ( 714-781-TOUR ) and reserved a spot for myself.

The tour meets at the Guided Tour garden, across from the Main Street train station and adjacent to City Hall.    Upon check-in I was asked to make a meal selection from the Jolly Holiday Bakery menu, as we would be served a meal at the tour conclusion  (since I was on the afternoon tour, this was essentially dinner even though the tour description referred to it as lunch).      We were given bottles of water while we waited — nice since it was a warm day.    A few minutes before our 2:30 tour was scheduled to begin, our tour guide, Mia, began introducing herself to the guests and handing out the audio devices we would use to hear Mia and also to listen to pre-recorded portions of the tour.     (The pre-recorded portions were almost entirely snippets of Walt Disney talking about whatever we were currently seeing on the tour, and occasionally a bit of music).

The tour starts across from the Disneyland Train Station

Once everyone was wired up and name badged, we headed over to our first stop, which was the Main Street Fire Station.    Mia told us a bit about the overall design of Main Street — that while it pulls some elements from Walt’s home town of Marceline, MO, it was really not intended to be any specific place.  Every visitor is supposed to see a bit of their own home town in it.    The train station and city hall are largely based on ones in Fort Collins, CO, the home town of Imagineer Harper Goff, who designed those buildings for Main Street.

First stop: The Fire Department. Walt’s private apartment, above, is where we will conclude the tour.

From there, we made the short walk over to the Town Square.    We stood in front of the flagpole, right about at the spot where Walt delivered his opening day dedication.   We listened to a recording of that speech.   Mia shared several stories about the park’s opening day, which was not practically perfect in every way. 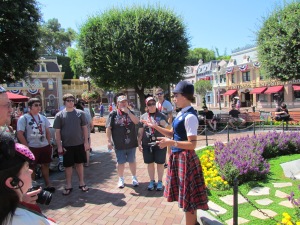 We proceeded down Main Street, making particular note of the many windows in the upper floors of the buildings which are dedicated to particular figures in Disney history that made lasting contributions.    I saw Imagineer Rolly Crump’s window; I was actually looking for the Sherman Brothers but missed it, so I’ll have to go back and look more carefully.    At the end of Main Street we paused at the Hub, to the side of the Partners statue,  while Mia discussed the overall hub-and-spoke design of the park and the use of “weinies” to pull the guest along from one area to another.

In Fantasyland we rode Peter Pan’s Flight, one of the original opening day attractions, and still one of the more popular attractions in the park.

In Fantasyland, about to ride Peter Pans Flight

From Peter Pan, we made our way over to New Orleans Square.   Here Mia told us about some of the non-public areas that were designed for Walt’s personal use and to entertain important visitors:  an expanded apartment over Pirates of the Caribbean (that Walt never got to use), Club 33, and a planned but never completed Jazz club.

We proceeded to the entrance to Club 33 — a very exclusive dining establishment for members only.    The waiting list for membership is quite long, and the membership cost is quite extravagant.    It’s on my bucket list to dine there someday, but for now, we were able to enter the lobby, which is not open to the public.   So while it’s not lunch or dinner at the Club, it’s still a very special opportunity, and I think one that everyone there really appreciated.

We wait by the door while Mia bribes some guards, or something

It appears to have worked, we’re in! 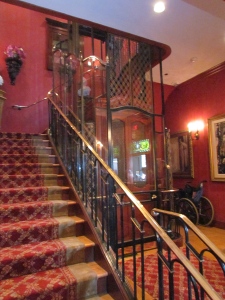 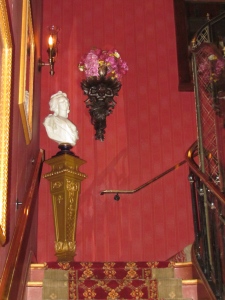 After spending a nice amount of time in the Club 33 lobby — it’s very nice that we didn’t feel rushed through here and everyone got to take pictures in the lift — we made our way over to an area next to the Haunted Mansion, where we learned a little about the various early concepts for both the Mansion (or The Museum of the Weird) and Pirates of the Caribbean (or Blue Bayou Lagoon).   Here we listened to more audio of Walt, along with Imagineer Claude Coats, describing the concepts of the attractions as they were envisioned at the time.    We’ll hear more about these attractions later, but the interesting bit at this point was that both of these rides were originally conceived as walk-though attractions.

At this point, roughly the midpoint of our tour, we paused for a restroom break.   When we resumed, we crossed the park into Tomorrowland, taking up a spot in front of the Carousel of Progress.    (Yes, it’s Innoventions now, and if you’re a bit younger than me perhaps to you it’s America Sings.)     While standing here Mia told us some stories about the various incarnations of the Fantasyland and Tomorrowland Autopias that have existed over the years.   (I can’t share all the great stories, as then there’d be less reason to take the tour)

From here we moved over to a location between the Finding Nemo submarine voyage lagoon and the Matterhorn.   We heard about the major expansion of Tomorrowland in the late 1950s that brought the Matternhorn and Monorail attractions to the park, and how innovative the steel tube, block dispatch system for the Matterhorn was.

We moved over to it’s a small world to hear stories about what a turning point the 1964-65 New York World’s Fair proved to be for Disneyland.    Creating rides and attractions for a theme park like Disneyland is an expensive proposition … but with the World’s Fair, Disney was actually paid by sponsors to develop attractions that would later find their way back to the parks.    The attractions that were designed this way included Great Moments with Mr. Lincoln, The Carousel of Progress, it’s a small world, and Ford’s Magic Skyway (which morphed into the PeopleMover System).   The Primeval World diorama seen along the Disneyland Railroad also came from the Magic Skyway exhibit.

I was aware of these attractions, and their World’s Fair heritage, prior to the tour.   But I didn’t realize that the Magic Skyway ride system was also the precursor to the Haunted Mansion’s OmniMover system (also used on a number of later rides),  and the small world boat system was similarly served as a prototype for the Pirates of the Caribbean flume.    So we can also credit the Worlds Fair experience of the Disney Imagineers for giving us those attractions in their current forms.

Now we crossed the park again, making our way to the Enchanted Tiki Room.    While this is an attraction many guests love to hate, I’ve always enjoyed it.    We experienced the show after hearing about Walt’s early work with audio animatronics.

Now our tour is almost at an end.   We make our way back up Main Street and stop in the gallery outside Great Moments with Mr. Lincoln.   Here, standing in front of the last picture of Walt Disney taken inside his park, we hear about his illness and death in 1966.

We then cross back over to the tour garden, where we are divided into smaller groups to go upstairs over the Firehouse and view Walt’s apartment.    Although we aren’t allowed to take photos in the apartment, our tour guide will take a picture of each of us, using our cameras, so I get a picture in front of the lamp that is always lit to signify Walt’s ongoing presence in the park. 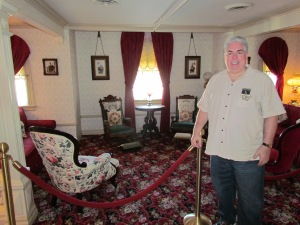 In Walt’s apartment above the Fire Dept.

The tour was a wonderful experience — the access to Club 33 and Walt’s apartment are two very special experiences that by themselves justify taking the tour.    Hearing Walt talk about the park — the only Disney park in the world that he personally visited — while standing in the places he stood, or in front of the attractions he was talking about on his show, is just a really special way to experience these stories, even if you’ve heard them before.

At the conclusion of the tour, we came back to the Guided Tour area for the final time, and sat at the shaded tables there to eat the meals we had ordered at check-in.    Mia circulated around the tables, continuing to answer questions or share stories, or pose for pictures with the guests.    We all received the Walk in Walt’s Disneyland Footsteps pin, featuring a well-known photograph of Walt on the front and a reproduction of the park dedication plaque inside, along with a silhouette of the Partners statue.    Even though I don’t collect many pins this one is a very nice keepsake from the experience.

I had to get a picture with Mia after the tour

The Walk in Walt’s Footsteps Tour is currently offered twice daily, at 9:30 a.m  and 2:30 p.m.   For more information and reservations visit the official tour page.

2 Responses to A Walk in Walt’s Disneyland Footsteps