This first-ever joint performance by Disney Legends Richard Sherman and Alan Menken was probably the single thing I was most looking forward to at the D23 Expo. 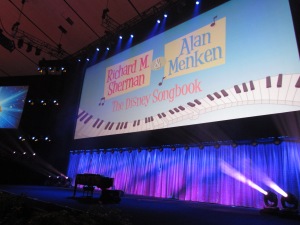 Between the two of them (and their writing partners), they are responsible for so much of the music that is associated with Disney films and theme park attractions.   It was truly a wonderful trip down memory lane.    There’s just no way to capture the magic in words, so I would highly recommend watching the linked videos of each performance.    If you can’t spare the time to do that, then just scanning the list of songs performed by each of them will give you a feel of how much each of these gentlemen has contributed to the Disney songbook 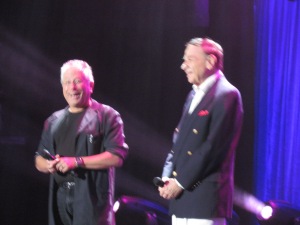 In the first half of the concert, Richard Sherman played and sang  (age before beauty …. and the beast, as Alan said after they were introduced and he yielded the stage to Richard).   This first segment was hosted by Tim O’Day, a frequent host at the D23 events, who kept things moving along and kept a nice conversation going with Richard between songs.

The Shermans also wrote for Hayley Mills in The Parent Trap; Let’s Get Together was the next piece on the program.

When Walt decided to be one of the first to start producing television shows in color, he asked the Shermans to write “something about color”.   The resulting Wonderful World of Color was used to open the television show, and still plays in Disney’s California Adventure every evening as the opening number in the World of Color water show.

The Ugly Bug Ball was written for Burl Ives to perform in Summer Magic .. I think this may be the only song Richard performed that I wasn’t previously familiar with.

Next we were treated to a trio of songs from Winnie the Pooh;  the title song, Pooh’s exercise song, and The Wonderful Thing about Tiggers.

Then a couple of songs from The Jungle Book .. That’s What Friends are For (the vulture song) and I Wanna Be Like You.     (Trivia note:  The Bare Necessities is not a Sherman Brothers tune, it was the only bit of music that survived from an earlier story treatment that predated the Sherman’s involvement). 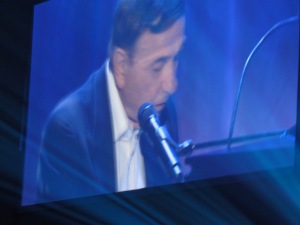 While introducing the next number, The Aristocats, Richard mentioned that his father was also a composer, and had also written for the theme song’s singer, Maurice Chevalier.

From Bedknobs and Broomsticks, we heard The Age of Not Believing.

We heard some of the best-known Sherman Brothers theme park songs:   The Tiki Room, and from Epcot’s Imagination pavilion, One Little Spark and Magic Journeys.

At this point, Richard was joined on stage by Jason Schwartzman and B.J. Novak who play Richard and his brother Robert in the upcoming film Saving Mr. Banks.    They performed A Spoonful of Sugar.   Richard then continued with other Mary Poppins tunes Chim Chim Cheree and Feed the Birds.

Another theme park favorite, There’s a Great Big Beautiful Tomorrow, was used to close out the set.    After leaving the stage briefly, Richard returned to serve up an encore of Supercalifragilisticexpialadocious.

Richard and Tim left the stage, and Alan came out to perform his set.    While Richard performed full songs, for the most part, Alan relied heavily on medleys of songs from each of his Disney productions.   This allowed him to cover just about twice the number of songs in roughly the same amount of time as Richard’s set.

Alan opened with The Little Mermaid, performing Part of Your World, and then a medley of Under the Sea, Poor Unfortunate Souls, Les Poissons, and Kiss the Girl. 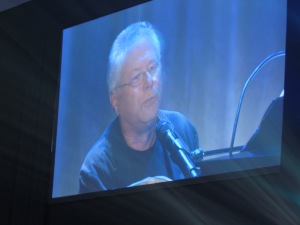 Next he did a medley of additional songs that were added to the Broadway version of The Little Mermaid;   If Only, She’s in Love, and Her Voice.

From Beauty and the Beast’s Broadway production we heard Human Again (originally written for the movie, but cut) and If I Can’t Love Her. 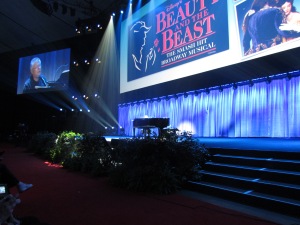 From Aladdin, a medley of Arabian Nights, One Jump Ahead, and Friend Like Me.

From Newsies, Carrying the Banner, King of New York, and Santa Fe.

Next was Pocahontas, from which we heard In the Middle of the River, If I Never Knew You, and Colors of the Wind.

A medley of Hunchback of Notre Dame songs included The Bells of Notre Dame, God Help the Outcast, and One Day Out There.

The Hercules medley comprised The Gospel Truth, Zero to Hero, and Go the Distance.

From Home on the Range, we heard Little Patch of Heaven, Yodle-Adle-Eedle-Idle-Oo, and Will the Sun Ever Shine Again.

For Enchanted, Alan shared that before he came on to the project, they were looking for a composer who could parody his musical style.    Turns out, he was just the guy to do that, and with True Love’s Kiss and Happy Working Song we hear songs that are amazingly good reproductions of Menken’s style, by Menken.

We heard four songs from Tangled:   When Will My Life Begin, Mother Knows Best, I’ve Got a Dream, and I See the Light.

Alan actually wrote a bit of music for Captain America.   Star Spangled Man With a Plan is played during the 1940’s era of the film when Captain America is being used to pitch savings bonds.

He also provided a song for The Neighbors sitcom episode “Sing Like A Larry Bird”, the song The Broadway Allen Song has been nominated for an Emmy and, if it wins, will give Alan the EGOT (Emmy, Golden Globe, Oscar, and Tony), as well as a Razzie.

To close out his set, Alan performed Somebody’s Got Your Back, from the under-development Broadway production of Aladdin.

Alan performed a solo encore of How Does She Know (from Enchanted).

Richard Sherman and Tim O’Day returned to the stage.    Tim asked, in an obvious set up, if either them had written any songs about “worlds”.

Richard then took the piano and asked Alan to perform the counterpoint as they led the audience in it’s a small world to close out the evening.