(for coverage of the Saturday morning presentations see here)

Based on the title, I thought we might be getting some insight into how the animation department works today (how CG and hand-drawn animation departments compete or co-operate, and similarly for Disney and Pixar animation groups).   Instead, this was really a look at upcoming animated features and shorts.

The first feature that we heard about was Frozen.  This is a Holiday 2013 release.  I had not heard anything about this feature prior to Destination D, so it was exciting to get a look at something completely new.

The presenter was CG animator Darrin Butters (Prep & Landing, Bolt, Fantasia 2000, and others).

Frozen is based on Hans Christian Andersen’s The Snow Queen.   We saw a number of story sketches here; no finished animation was previewed.

The story focuses on two sisters, younger Anna (Kristen Bell) and older Elsa (Idina Menzel from Wicked, Rent, and Enchanted).   Few plot details were given other than it involves a curse, some prophecy, and snowmen sidekicks.

Songs will be provided by Bobby Lopez & Kristen Anderson Lopez (Book of Mormon, Avenue Q, Winnie the Pooh).   We heard one song from the movie, “Let it Go”, performed live for us on stage to close out the presentation.

The short film Paperman will play in front of Wreck-it Ralph coming this November.   We were shown this delightful film in its entirety, and were the first non-industry audience to see it.

The presentation prior to showing the film described the unique animation style that is a blend of hand-drawn and computer generated.  The idea is to preserve the animators original sketch lines (which usually get cleaned up) all the way to final animation.   The technique was interesting but it was really the story that made this stand out.

Paperman is the story of a chance encounter; boy meets girl on subway platform, then they are separated.   While at work, he spots her in a building across the street, and tries desperately to reach her with a paper airplane.   Then another.   Then another.    You’ll have to see the film to find whether it all works out in the end.

The final film discussed in this presentation was Wreck-it Ralph, coming in November.    We were shown about 10 minutes of footage from the movie.  I think most of the information that was shared with us (casting, plot details) was already known, so I’ll just recap briefly.

Ralph (John C. Reilly) is the villain in the 80s style arcade video game Fix-it Felix Jr.  (Felix is Jack McBrayer).   But Ralph doesn’t want to be a bad guy anymore.  So he leaves his game in search of a place he can be the hero.  (The premise here is that the power cord for the game leads to a ‘Game Central Station’ — a power strip where all the games are plugged in — allowing characters to come and go, and enter other games.

The different games have very different visual styles which definitely makes things  interesting to look at.   There are many, many cameos by game characters dating from classics such as Pac-Man and QBert right up to present day.

This sounded like it would be a fun presentation, and it certainly was.   This was a presentation of Disney rarities — I probably had seen close to half of what was presented here, and given the Disney Geek quality of the audience I was probably not unusual in this respect.   But the animation that was shown has been in the vault for a long time, so it’s certainly hard-to-find, rare footage that it was fun to see again, or for the first time, as the case may be.

Don Hahn and Dave Bossert were the hosts.   The format was to alternate film snippets (or in some case complete shorts) with commercials; it was very entertaining to get a look back at a time when Disney was more than willing to have their characters used in ads for all sorts of products.

This whole presentation was just wonderful; kudos to whoever curated the content as it was a great mix of historically significant pieces, just-for-laughs segments, and great nostalgia for bygone attractions.

Like some of the morning sessions, this was a session that focused very much on personalities rather than technical aspects.    Essentially there are three individuals whose contributions to the parks were featured, although a lot of other imagineers and animators were mentioned along the way.

Claude Coats was the first to be featured.   Tony Baxter (Sr. VP, Imagineering and future Disney Legend) who worked with Claude, did this part of the presentation.   Claude did the show design for some of Disneylands’s most memorable attractions, including the Haunted Mansion, Pirates of the Caribbean, Alice in Wonderland, and Mr. Toad.  At EPCOT he contributed to Horizons, World of Motion, Universe of Energy, and several others.    On several projects he collaborated with Mary Blair. 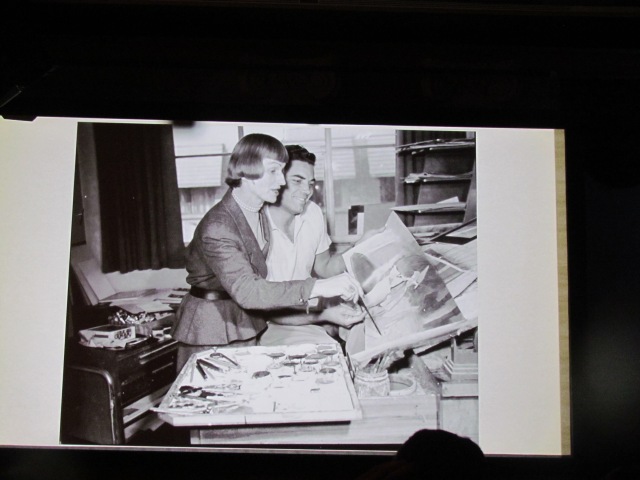 The next Imagineer to be featured was Herb Ryman.   If you’ve ever seen concept art for Disneyland or EPCOT, it was most likely Herb’s work.   The original concept drawing for Disneyland, shown to investors to help line up financing for the park, is a Herb Ryman piece. 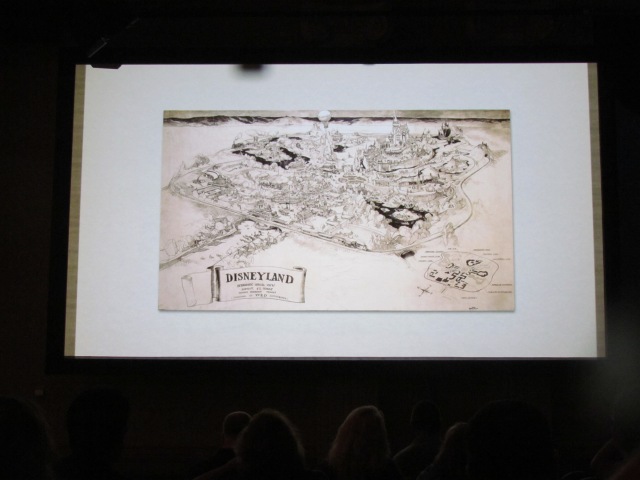 Next we hear about Marc Davis.   As an animator, Marc worked on Bambi, Alice in Wonderland, Peter Pan (Tinkerbell), and others.  He drew some of the definitive Disney villains including Maleficient and Cruella de Vil.   As an Imagineer he worked on it’s a small world, the Jungle Cruise, the Tiki Room, Haunted Mansion, Pirates of the Caribbean, and others.

An Evening with Dick Van Dyke

After a day full of presentations, after dinner we had a fabulous performance by Dick Van Dyke and his a capella group, the Vantastix.   They opened with Chitty Chitty Bang Bang and continued with selections from Bye Bye Birdie. Mary Poppins (of course!), Jungle Book, Dumbo and quite few others.   It was a magical evening of music and laughter, if you ever have the chance to see this group perform, don’t miss it.   (Buy their CD here) 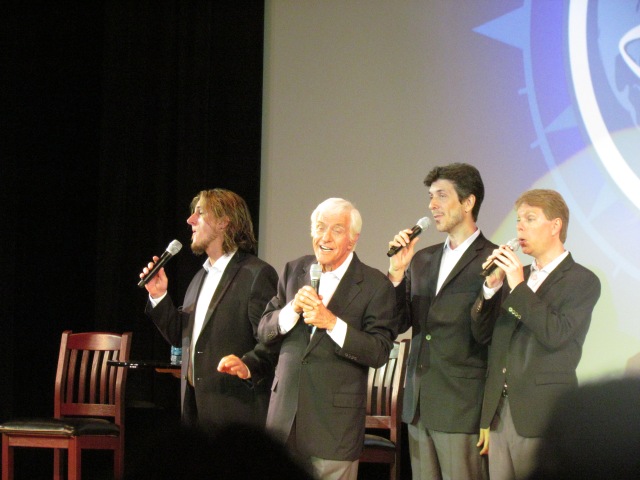