When you ask animation buffs to describe the style of Disney animation, you’ll hear that the drawings are lifelike, the overall style realistic, the stories moving, the characters memorable.   Other studios like Warner Brothers and Fleischer get the adjectives funny, wild, zany, and of course looney.

But in the long history of Disney animation, there have been many wild and crazy bits of animation, and this morning’s session set out to provide that Disney can be just as wild and wacky as any animation department. 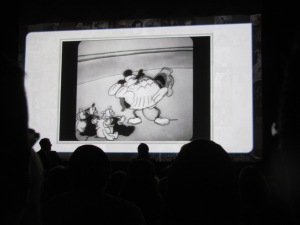 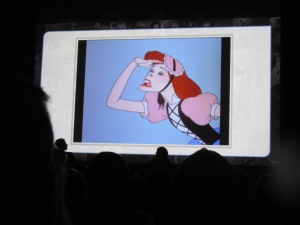 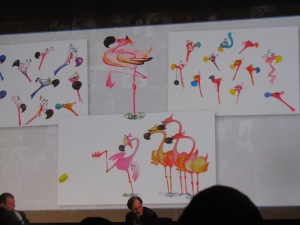 The verdict:  Disney can indeed be pretty wild and wacky.

This was great to watch, and a write-up just won’t be able to do it justice because it was so visual.

Animator Andreas Deja brought a number of pencil drawings of well-known Disney characters drawn by top animators.   His comments were insightful, pointing out where certain poses really showed strength of line, or pointing out various things that make a drawing “work”, but that a non-artist would not likely notice.   (One thing that comes across again and again in all these presentations is the tremendous respect that the current animators have for those that preceded them … there is just such a legacy there, and it seems they never lose sight of that and are incredibly respectful of it).

Seeing so many great drawings from the archives was interesting, but the presentation really took off for me when Andreas picked up a marker and began drawing some of the characters he was the supervising animator for.

A gallery showing these drawings is here.

Tinker Bell: The Evolution of a Disney Character

Frankly, going in this was a session I was not really interested in … Tinker Bell isn’t a favorite of mine, and knowing that at least some of the talk was covering “modern” Tink (3D graphics and she talks!  The horror!)  I was tempted to duck out and take in a few rides.   I’m glad I stayed … although it wasn’t my favorite talk of the weekend, it was very well researched, contained some surprises, and was worthwhile.

The presenter, Mindy Johnson, is author of an upcoming book from which most of this presentation was drawn.   (The book, Tinker Bell: An Evolution, will be coming out in fall of 2013 so don’t go looking for it yet).

The presentation started with the earliest ideas about Tink in J. M. Barrie’s writing and early stage adaptations of his works.     Tinker Bell was represented on stage by just a light effect and the sound of a bell.   (Specifically a bell such as would be used on a tinker’s wagon to alert customers, not unlike an ice cream truck’s music or horns).   The character, originally called Tippy Toe, thus became Tinker Bell.

We saw early concept art of Disney’s Tinker Bell as a redhead before Marc Davis drew the character we know today.    We heard from Margaret Kerry, who was the live action reference model for Tinker Bell, and also from Ginny Mack, an ink and paint girl who was recruited as the facial model for Tink.

Moving on to the modern era, we also heard from Mae Whitman, who has voiced Tinker Bell in recent releases, and director Peggy Holmes, director of Secret of the Rings, the next film in the Tinker Bell series.

That was it for the morning panels … come back tomorrow to hear about the afternoon panels.