This is one of those you-had-to-be there sessions; hearing is everything.    It’s impossible to listen to Bill Farmer doing his most well-known Disney voice without breaking out into a big Goofy grin.

Bill Farmer does the voice of Goofy and also Pluto (and for Pluto, he not only does Pluto in English but in foreign languages as well … what range!).    He talked about auditioning and winning the role of Goofy, and gave a dramatic reading of Goofy doing Romeo.

Lisa Davis voiced Anita in 101 Dalmatians.   She had worked with Zsa-Zsa Gabor in (I’m not making this up) Queen of Outer Space, and had learned to do a pretty good Zsa-Zsa impersonation.    Walt had heard this and wanted Lisa to do the voice of Cruella De Vil, who he pictured as being Zsa-Zsa like.   During the audition, during which Walt read the Anita part to Lisa’s Cruella, Lisa felt she just wasn’t right for the character, and asked if she could try Anita.   They tried it that way, and Lisa won the part.

David Frankham did the voice of Sgt. Tibbs (the cat) in 101 Dalmatians.

Kathryn Beaumont was Alice in Alice in Wonderland, and also Wendy Darling in Peter Pan.   She shared stories of working directly with Walt.   She was cast, she says, because her voice was English enough to fit the role, but not so much so as to sound too foreign to American audiences.

Chris Sanders was the director of Lilo and Stitch.   Frequently during the animation process, animators or others working on a film will do temp voice tracks to use during early cuts of the film, when animation is in storyboard or pencil test form.   Chris did the Stitch voice fully intending that it would be replaced with a real actor at some point.   Even when no better voice was found, he was very hesitant, telling his co-director that if his track wasn’t great, there would be no hard feelings about tossing it.    But he obviously nailed it.

Bruce Reitherman is the son of Disney Legend and animator Woolie Reitherman.   He did the voice of Christopher Robin in the first Winnie the Pooh featurette,  and also Mowgli in The Jungle Book.

Snow White: Still the Fairest of Them All

Since the theme of the weekend was “Celebrating 75 Years of Disney Feature Animation”, it was only fitting that a segment be devoted to the one that started it all, Disney’s first full-length animated motion picture.    Tim O’Day was again the host, joined this time by musicologist and historian Alex Rannie. and special guest Marge Champion.

Marge was the original live-action reference model for Snow White.   She’s 93 years young and can tell great stories about how certain scenes were staged for the reference (for example, ropes hanging from clotheslines were used to simulate the forest Snow White runs through). 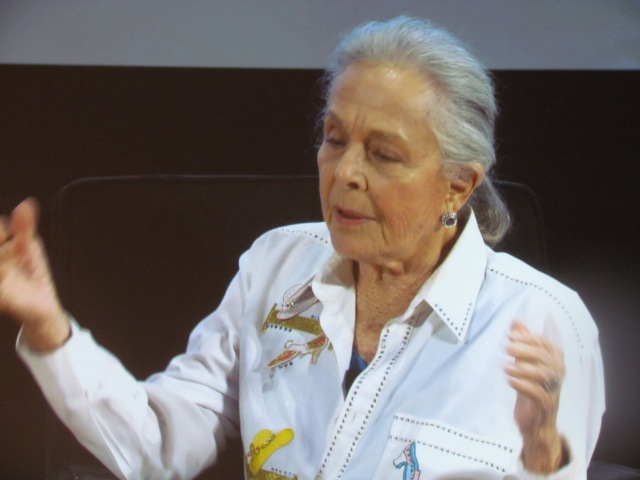 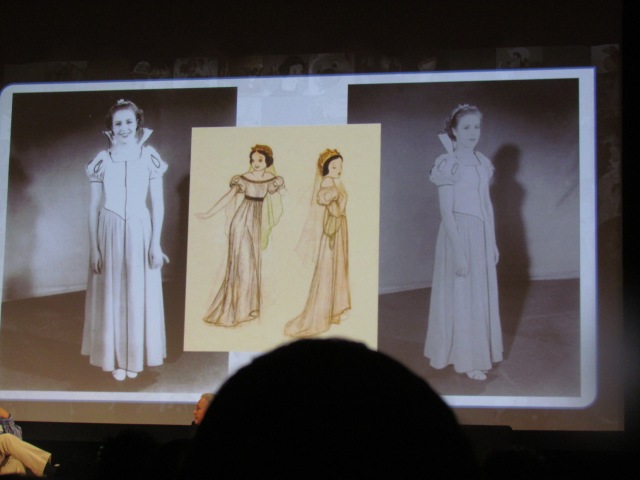 An Evening with Alan Menken

Once again, the evening was capped off by a concert.   Dick Van Dyke set the bar pretty high, but I’d have to say the performance by 8-time Oscar winner Alan Menken was even better.   Other than the opening and closing numbers, the evening progressed chronologically through Alan’s career.   Because of the sheer volume of things he’s worked on, most movies and shows were represented by just brief excerpts of songs, rather than full numbers.   I think this was a great choice so that more material could be included.

There were a number of songs featured that did not make it into the movies or shows, for whatever reason.    Songs written for Little Shop of Horrors back when they were still trying to find the right tone for the musical; songs dropped from Aladdin when the story was extensively reworked, even a song from a Roger Rabbit prequel that was never made.

The evening opened with Prince Ali, from Aladdin.   Then we heard selections from God Bless You, Mr. Rosewater; Little Shop of Horrors; The Little Mermaid; Beauty and the Beast; Aladdin; Newsies; Pocohontas; Hercules; Hunchback of Notre Dame; Tangled; Enhanted, and several others.    The evening concluded with Proud of Your Boy, an Ashman-Menken collaboration that was dropped from the Aladdin film, but is being used in the upcoming Broadway production.

This really ended things on a high note, and the weekend was a fantastic tribute to the long storied history of Disney Animation.

This entry was posted in Animation, D23, Destination:D, Disney. Bookmark the permalink.