A long and excellent day. I was out before sunrise and got these photos on Ipanema beach. The lights that you see creeping up the hill in the background are the lights of a favela on the hillside there (a few miles from here). After the storms of the past 2 days, the surf is still up, and the 3rd photo shows some local surfers.

Per the usual CIEE formula, we had experts lecture and Q&A in the morning, and visits to the “real” Rio in the afternoon. Our lectures were at PUC-Rio (pronounced “POO-key Rio”), which is a private, Catholic university in an expensive part of town (Leblon). Our first was about the legal history of the favelas. They have been illegal for most of the time they have existed, but from the late 1800s until the 1930s there was a policy of ‘precarious tolerance’. Our expert, Dr. Goncalves, is a law professor, and he showed us the actual language of civic decisions through the past century. The blatant racism of the city officials is plain in the language of their edicts. In 1925 the law required the favelas to be hidden behind high walls; in 1937 they were made explicitly illegal. Although they were supposed to be destroyed at that time, the policy of active removal was not implemented. In the 1960s and 70s the residents of the favelas organized to demand property rights and non-removal. In 1988 the new federal constitution gave these very rights. However, this policy came to an end in 2009 as the Olympic decision was bring made. Since 2009 about 30,000 residents have been removed, mostly relocated far from the city center in the west part of Rio. The current policy (2011) calls for no new housing units in the favelas, and only such improvements that are necessary for safety, sanitation, livability, etc.

The second lecture was on the history of organized crime in Brazil, with an emphasis on how the organized crime syndicates here gained control of the prisons, and took over the favelas. We heard an estimate that 80% of all favelas are controlled either by organized crime (drug dealing gangs), or militias (self-appointed, corrupt, well-armed off duty police, firemen, former soldiers, etc.). Only about 20% of the favelas are free of these two violent controlling influences.

Next we went to the largest complex of favelas in Rio. Fifteen communities on several adjacent hillsides named Complexo do Alemao. This favela went through the pacification process (the residents call it “occupation”) in 2009-2010, and in 2011 they built a modern cable gondola service connecting five of the hilltops to the city below. Next to each station the police have built a modern UPP headquarters (“police pacification unit”). The police presence throughout these neighborhoods is obvious everywhere.

We visited an NGO named Oca dos Curimins, which is an org focused on providing education and other services to children in the neighborhood. Our local expert has been involved with this effort for 36 years. There are also support systems for adult women/mothers in the neighborhood. Only one of the programs has any outside funding; a job training program sponsored by The Coca-Cola Co. In the photos below, you see our group as we learn about the programs, then a picture of our tour guide Joao Carlos in the computer lab paid for with Coke money (the good kind). From the rooftop we took photos of the gondola system, the favelas, the incredible views all the way to the Atlantic, and each other. 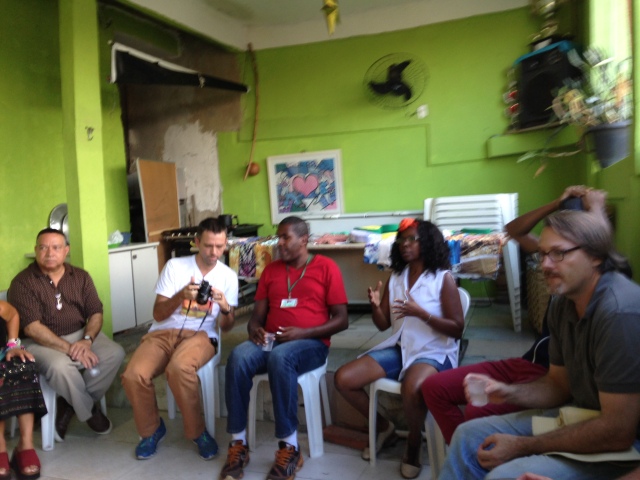 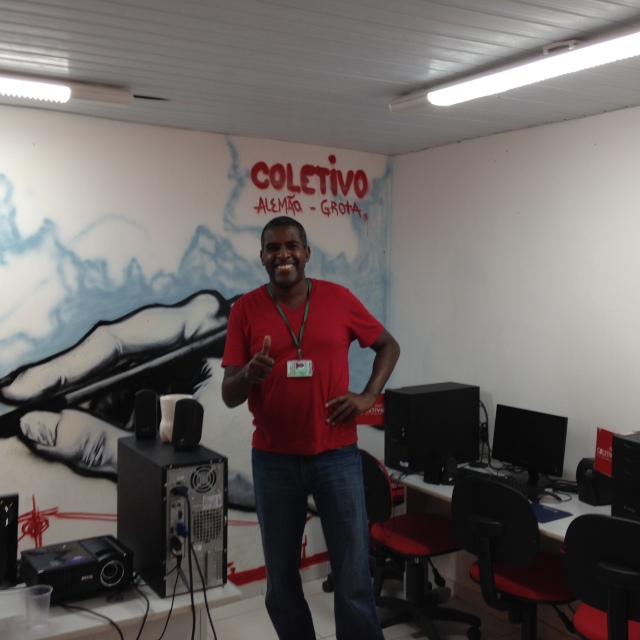 On our way back to the south district where we are staying, we stopped at the Sambodromo. This is the worlds’ largest linear stadium. Tens of thousands sit here to watch Carnvale each year. Notice the sky boxes. It is an impressive building that runs along the street (both sides) for several blocks, but is only used for a few nights per year.

My day started early, and we were moving and/or learning continuously until we returned to the hotel after 630pm. I like this kind of day – full of activities and lots of new information. If you are interested in more details or have any questions, please post them on the blog or on Facebook and I will get back to you tomorrow.

I feel extremely grateful tonight for the life I have – for my family, my job, and my neighborhood.

Associate Professor and Chair, Department of Finance Sykes College of Business, University of Tampa @MarcusAIngram on twitter
View all posts by Marcus Allan Ingram →
This entry was posted in Travel and tagged CIEE, Favela, Ipanema, Rio. Bookmark the permalink.