Just two days of our seminar left, and after that my Rio-related posts to Epic Mikey will be complete. If you like the info and the commentary you’ve been reading here this week, please follow me on twitter – @MarcusAIngram. I post there regularly, and I plan to continue to follow the stories you have read about here.

Vila Autodromo is the most egregious example we’ll see here of the difficulties in the favelas that are directly caused by attempted government intervention. This neighborhood is flat, not hillside, not controlled by gangs or militias, tranquil and peaceful. It has been there for at least 40 years. But since it is very near to the 2016 Olympic site, there have recently been new threats to remove the residents.

Vila Autodromo is so named because it is located right up against the property of the race track at Jacarepagua that hosted the Formula 1 Brazil Grand Prix in 1978 and 1981-89. The original residents built there because of the access to fishing in the nearby lagoon, and the community grew as the residents found job opportunities building and working at the track, which was opened in 1977. The track is now closed, and the main Olympic stadium and many other venues are being constructed on the site. It is 19 miles from the tourista areas in South Zone, where we are staying, and it took 1 hour and 40 minutes to get there in today’s traffic. Traffic may have been made worse by a bus strike and bad weather, but imagine how long this journey will seem when the Olympics are in town.

Despite its peaceful nature, this community has been threatened with destruction many times since the early 1990s. In 1993, and in 1996, the residents successfully fought for and won a 30 year, then a 99 year, lease on the land. So, legally, they cannot be evicted. But the municipal government has gone in and made cash offers plus public housing that are almost too good to be believed. Some homeowners have been offered up to 2 million Reais (about $1 million US), to abandon their legal residences. Families have been offered numerous rent-free apartments in nearby public housing. (By comparison, when some of the South Zone favelas were forcibly removed in the 1980s, they were forced out to the “City of God”, a housing project made famous by the dreary movie of the same name. That means they were forcibly relocated as far as our journey today.) When residents accept these offers, their homes are bulldozed immediately and the lots left vacant – they cannot be built on again as the departing residents have given their rights to the land back to the government. At least so far, the city has removed most of the rubble.

The motivation is simple; the land will be given to the developers of the Olympic site after the Olympics, and the area has grown up to be an area of expensive, high rise residences with lagoon views. After the Olympics, the site will be re-developed in a similar fashion, only closer to the water. 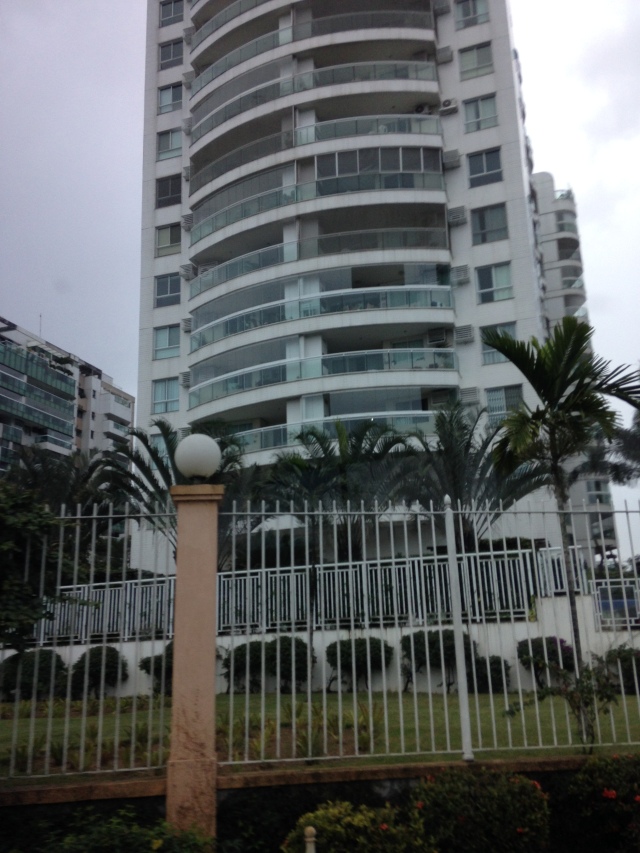 But developers cannot force the residents off the land they legally reside on; they must coerce the government to try to coerce the people to leave. That’s what bothers me the most about the conflicts between the favelas and the government; one side has all the power and is not hesitant to use it.

Nevertheless, the residents have done an exemplary job of organizing and resisting. We met today with the president of the residents association. Twice before in his life he has had his home destroyed and been forced to move away from his home. He chose to come to Vila Autodromo because of its tranquil nature; it’s a good place to raise his family. In the photos below, you see our meeting with him in the building of the residents association. The banners they have made read: “Viva a Vila Autodromo – Rio without Removals.

The most heartbreaking story I heard today was this: he has a 14 year old daughter. Her biological mother accepted an offer to move to the nearby projects. Now that most of her friends have gone there too, she thinks about moving to the projects. Can you imagine any coercion stronger than this?

Nevertheless, he and the other residents are strong. Most have resisted coercion, and turned down lucrative offers. These are their homes, and they are proud of them; in most cases they have built these dwellings with their own hands. It is a good location, and they are there legally. But the pressure on the residents is growing stronger every day. Matt, our seminar leader, believes they have the strength and solidarity to hold out; I’m not so sure. I put the odds at 50/50. I’ll continue to follow and post the story of the Vila Autodromo on my twitter mini-blog.

After this visit, we had lunch in another nearby favela. This one has recently been paved, curbs added, etc. It is so different from Vila a Autodromo, where even though the roads are wide and flat, doesn’t have any paving, any sidewalks or any sewage system.

Tomorrow we meet with another residents’ association president, and the UPP commander from the Vidigal favela. That’s the one climbing up the hill above Leblon that I’ve shown before in my pictures of Ipanema. Mostly, that will be Q&A; our final classroom experience of the seminar. Afterwards, we’ll try to make up most of the sightseeing that got rained out on Saturday. Sounds like another great day ahead.

Associate Professor and Chair, Department of Finance Sykes College of Business, University of Tampa @MarcusAIngram on twitter
View all posts by Marcus Allan Ingram →
This entry was posted in Travel and tagged Brazil, Favela, Rio, Vila Autodromo. Bookmark the permalink.